I'm loving the color turquoise right now. It reminds me of the blue skies we used to have here in Colorado, before global warming put us into permanent winter. It's like that movie Groundhog Day. We keep getting the same storm over and over and over again. We had a doozy last night--no school today, trees falling on cars, downed power lines, the usual March stuff. It just feels like winter is going to last for-freaking-ever, so I might as well keep my feet warm, and stay one step ahead of the holidays by knitting a new sock pattern in several versions. Yeah, I crack me up too.
Half way through the first pair, I came up with an idea--reverse the pattern on the other sock. Brilliant, right? Not so much. Turns out, at least on my needles, a right twist and a left twist aren't mirror images of each other. They don't look opposite, they look different. Not exactly what I want in a pair of socks. I'm a 2-at-a-timer, so I finished the first pair with a right twist pattern, then started the second pair with a left twist. This is when I figured out these two pairs aren't going to be identical twins, they'll be fraternal. I've got less than two inches on the second pair. My dilemma is whether to keep going with the left twist, which is a bit harder to knit than a right twist, and put it in the FO holiday pile, or rip it and go with another pair of right twist, which I like better. It's not that the left twist is hideous, I just don't like it as well.
At any rate, I'm calling the pattern Sandia Crest. It's the highest point on the New Mexico Turquoise Trail. The original is knit with Cascade 220 Superwash. I've ordered some sock weight yarn, in a multi-turquoise, and I'll work on that version when I get the yarn on Friday, if we don't get another storm that stops The Big Brown Van from getting to my house. I'll post the patterns soon.
Sandia Crest 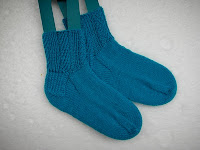 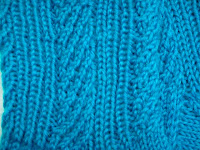 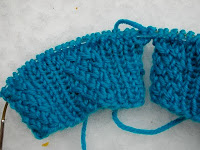