Shout-out to Alan at Bed Bath & Beyond

Yesterday, DH and I had to go shopping for a new down comforter. A certain person's little dog decided it was time for the old comforter to go, and let us know this by peeing on it the day before. We also have a cat, but it was pretty clear who the real culprit was. Sophie had refused to come to bed on the night in question. Instead, she hid behind the clothes hamper. Busted! DH tried to convince me that it could have been Katie, our cat, but I knew better. A cat will stand over the evidence and be all "Yeah I did it. And your point is?" Even DH, who believes his dog can do no wrong, finally had to admit that Sophie was the guilty one. You wouldn't know it to look at her, would you? It's the eyes. 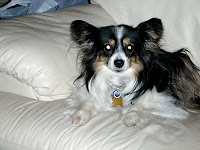 We drove all over town looking for a good quality comforter that cost less than a car payment--not as easy as you would think. Seriously. Who knew you could pay $1,200 for a comforter? I know it's been a long while since we bought the old one, but really! And as long as there's a chance that our pets could confuse the comforter with the lawn or the litter box, paying that much money is insane.
After hours of shopping with nothing to show for it except a jumbo box of assorted Rice Krispies Treats and some printer paper, we ended up at Bed Bath & Beyond. We found a comforter we liked, at a decent price, but then a scary and wonderful thing happened. Alan, who was working the floor at BB&B, showed us a different comforter. This one was priced $50 more than the comforter we had just picked out, but Alan informed us that in a day or two it was going on sale for half price, and maybe we wanted to hold off. He also told us that if we got a BB&B coupon in the mail after we bought the comforter, we could bring in that coupon and the receipt and they would give us back the difference. How cool is this?!?!?
Yes, I know I'm pathetic for getting giddy over something like this, but when's the last time you shopped and got customer service this great? Call me crazy, but it felt like Alan cared. Bed Bath and Beyond, if you give Alan a raise, I will also buy a waffle iron when I buy my half-price comforter. The old waffle iron died a few months ago, but I'm pretty sure the dog had nothing to do with it.
at 9:20 AM