I don't know if it was allergies or a cold coming on, but this morning I felt like a crap cupcake. All I could think about was staying put the entire day. It was going to be a hot one and the plan was to stay inside my air conditioned house and finish Tilly's sweater. I'm not a fan of artificial environments but I'm not into suffering either. We don't crank up the AC very high during the day, but it does help keep the pollen out. The air conditioner doesn't even get turned on for the season until we can't stand the heat and pollen anymore. It's just nice to have the fresh air until it's not fresh anymore.

Aaaaaand of course the day didn't work out like I'd planned. I was out of the house more than in it and got no knitting done until I took DD to her doctor's appointment this afternoon. This was probably her last visit to the pediatric office we've gone to since she was two years old. The appointment was supposed to be yesterday, but all hell broke loose, they got severely behind, so we ended up leaving before they saw us. We had to, if she was going to be on time for her driving test. She passed the test, we changed the appointment to today, and everything worked out in the end.

I'm still trying to wrap my brain around all these changes and milestones. My baby is gone, but I've gained a designated driver--she'll drive while I knit. Awesome!

Maybe I can finish the sweater tomorrow, but with my luck, I think I'll buy a lottery ticket--that might be a surer bet. I love the buttons I found--I think they pick up the colors in the yarn nicely. They're shank buttons, so I pushed some through the stitches so I could see how they'd look. It needs a good blocking, but I think it will be very sweet. 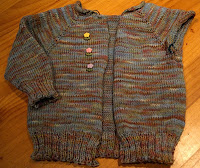 Giving a shout-out to My Kitchen in the Rockies. Check it out--she's got a killer watermelon cocktail recipe today. Kirsten, maybe next time you're going to be in Denver, let me know and we can do a yarn crawl together.
at 9:11 PM