Soup to die for

There's been no knitting accomplished today. None. That's what happens when you over-sleep, go for a workout, lunch with your bff, pick up your sick kid from school, then come home and cook soup. Oh, but not just any soup, my peeps. This is a soup that says, "I love you so much, I'd take a bullet for you." To top it off, I'm fighting tooth and nail NOT to get a cold. *Cold Snap don't fail me now! I have DD and DH to thank (they felt lousy first) but to show there's no hard feelings, I made this: 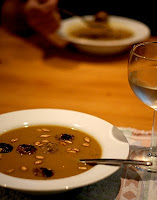 Yes, the recipe is involved, but break it down into parts and it's doable for just about any skill level. I made it in about two hours. A sane person would make the spice mix one day, roast and puree the squash the next, then pull it all together on the third day. To add the carnivore element, I lightly steamed some Italian sausages, cooled them a bit, then cut them into small chunks, which I browned on both cut sides--easy meatballs without the fuss. I also roasted the seeds I pulled from the squash for garnish. If you look at the recipe reviews you can see my notes (Susan, Lakewood CO).

Butternut squash is a pain in the butt to peel and cut up, but so worth it. You can buy it already groomed at Whole Foods, but it will cost you about a gazillion dollars. Costco has it ready to cook around the holidays and it's much more reasonably priced, but not organic. I buy it and so far nobody has dropped dead, but I do try to go organic when I can.

It was the perfect soup for the first day of fall, and hopefully it will make DD feel better. I'll probably roast a couple of pans of the squash and freeze it for some snowy, hand-knit sock kind of days. They'll be here before you know it.

* I swear by Cold Snap. It has saved me from a cold many, many times. I don't sell the stuff and this isn't medical advice, but I've only had one person say it made her freak out and she was nuts to begin with. Consult your physician or watch an episode of House.
at 8:19 PM