If you know me, you know I love gadgets. My niece once told me her mom said I have every kitchen gadget ever made. This from a woman who thinks Hamburger Helper is gourmet if you use organic meat. Whatever. This happens not to be true--I've been jonesing for one of those little blowtorches you use for creme brulee absolutely forever and nobody has taken the hint. I have no idea why. It's not as if I can't be trusted with open flames. Really.

One gadget I do have that gets plenty of use is this: 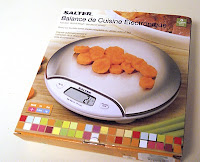 I don't know how you cook without one of these, but that's not my main use for it. It's great for weighing yarn. As you sock knitters know, I like mine two-at-a-time and most of my favorite sock yarns come in hanks big enough for a pair. That means I end up dividing them in half. That's where the scale comes in. Weighing is much more accurate than eyeballing.

It's also been handy with my latest obsession project--scarves knit sideways with a single skein of yarn. If you've made this scarf, you've seen the clever diagram she uses. It shows the percentage of yarn used for the increase, even, and decrease sections. Very clever! I've designed two scarves, with a third one in the works, using this method. It keeps me from running out of yarn, a knitter's worst nightmare, and makes writing the pattern a bit easier--I know when to start each new section based on how much yarn I've used. It will also make it easier to substitute yarns and to use a different gauge. I'm betting you've already thought of a bunch of ways to use a scale like this.

Here's a photo of the second scarf in my planned series of three:

I made increases until I was happy with the width, then I weighed the yarn and figured out how much I'd have left for the center. Easy peasy.

If you've dropped hints for a digital scale and those hints have fallen on deaf ears, then let me possibly make your day. I'm giving away this scale as part of my blogoversary that I've really been hyping lately. Yeah, I crack me up too.

But wait--there's more! If you're one of my blog followers and the lucky number generator picks YOU, I'll throw in a skein of Cascade Heritage sock yarn, in the very yummy shade of raspberry, color number 5617. If you don't knit or don't want the yarn or aren't a follower, the second number picked will receive the yarn.

There will be more giveaways before the end of January, or at least the details will be released before then. DH is getting a colonoscopy at the end of the month, and this is just my little way of not only celebrating, but reminding you to get yours. Helluva segue, isn't it?

To enter the digital scale giveaway, just leave a comment about digital scales (and/or colonoscopies) ON THIS POST. If I've remembered my hormone patch and I'm in a good mood, I'll move your comment here if you inadvertently leave it on another post. You're taking chances if you don't leave it here, however. Just sayin'...