The topic for day two of the 2nd Annual Knitting and Crochet Blog Week:


Look back over your last year of projects and compare where you are in terms of skill and knowledge of your craft to this time last year. Have you learned any new skills or forms of knitting/crochet (can you crochet cable stitches now where you didn’t even know such things existed last year? Have you recently put a foot in the tiled world of entrelac? Had you even picked up a pair of needles or crochet hook this time last year?

JelliDonut isn't usually about the long post, so if you need it down and dirty, skip to the last paragraph. That's the important one. But if you have a few minutes...
I'm not one to linger over past achievements. As I was looking over my Ravelry projects page, I was surprised at how many of my finished pieces I haven't even bothered to put there. My ideas for patterns have come so fast and furious, one is barely off the needles before I'm starting on the next. Not a bad problem to have except that I want to publish them and hopefully see them on the needles of other knitters. How about we just do a Vulcan mind meld? And don't get me started on the 7,382 patterns in my Ravelry queue. There's so much talent out there, it's hard not to fall in love with something new every day.
But as far as stuff I've actually finished, I've dabbled in colorwork a tad: 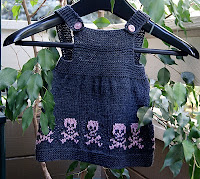 and added beads to my knitting for the first time:

But really, the biggest leap I've taken is how serious I've gotten about knitting and everything that goes with it.
This (mostly) knitting blog is just a little over a year old. I swear I woke up one day and said, "Hmm. I've got some time on my hands. Why don't I start a blog today?" Crazy, but that's how I roll. See the cliff. Jump off the cliff. I figured out early that good photos help, so I got a decent camera for my birthday last year, then took some photography classes so I could produce better photos of my FO's--that's finished objects for you non-knitters.
I've started an Etsy shop, which has been woefully neglected lately, but was the result of several hats I designed. The plan is to sell the prototypes on Etsy and maybe the patterns too.
Speaking of patterns, a few months ago I got a tech editor to work on the pattern for one of the hats that started me on Etsy. Her four pages of notes for just one of my patterns only mildly freaked me out, and I'm more determined than ever to get my patterns out there. I've even contacted someone about designing a logo for me. Get my autograph while you can--I'm gonna be big and I'm not just talking about my butt.
I attended Madrona for the first time, and I've taken several other knitting classes from some pretty experienced teachers. I think it's paid off because I've been asked to test knit, and to do some knitting for the portfolio of a pretty cool designer. I'm not bragging here. I'm still pretty stunned that somebody thinks my knitting is good enough for their patterns. Stunned and humbled.
I have begun working with a well known knitter, designer, and author who lives here in Colorado. The job title is still up in the air--I'm torn between aide-de-campe, adjuntanté, and She Who Must Be Obeyed--but I'm extremely excited about the opportunity to help her get her first e-book and e-patterns published, and her seventh book released.
Last, and decidedly not least, in the past year I've made so many friends from and because of knitting. I've been gifted with socks and yarn, quilted pin cushions and books, words of inspiration and thoughtfulness, and I've even met some of you. A year ago, I never would have dreamt any of this was possible. Not a bad way to spend a year. Can't wait to see what the next one brings!
at 2:33 PM

Email ThisBlogThis!Share to TwitterShare to FacebookShare to Pinterest
Labels: 2KCBWDAY2