In my family I have many titles--She Who Will Be Obeyed and She Who Always Puts The Toilet Seat Down being several among many. But the title that's probably most often used is She Who Reads The Directions. (I know what you're thinking. Cranky bitch isn't a title; it's a description. So there.)

DH used to buy me a new cell phone anytime he upgraded his, because he knew I'd open up the manual first thing and follow the instructions for setting up email, taking photos, using the apps--all the things you actually buy a cell phone for. I've also installed hard drives in our computers, a new thermostat in our home, and re-lit the pilot light on the furnace because I READ INSTRUCTIONS. You'd think this would carry over to knitting. Ahem.

I present to you two pieces of lace. This is the edging for Jared Flood's Rock Island Shawl. Notice how the lace on the right is wider than the lace on the left, even though they're both knit on the same size needle, with the exact same yarn. The lace on the left appears narrower because its left side curls up slightly. Not a good scenario. Embiggen the next photo for a clue as to why. 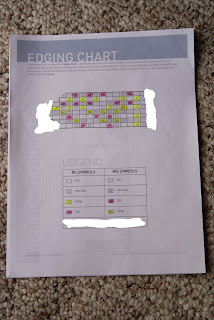 In case you aren't able to read the text under the Edging Chart section, it says something about "executing the symbol action that corresponds to the side of the fabric you are working on." Then, check out the symbol chart at the bottom. The same symbol on the opposite side of the fabric IS NOT WORKED THE SAME WAY. More than a minor detail, wouldn't you say? I might have noticed this way before I'd knit a couple of feet of lace if I'd read the instructions, ALL OF THEM, thus saving me from having to start all over again. I might even have noticed it if I hadn't ignored the little voice in my head that kept saying, "Something is not right here." I surely would have noticed it if I'd gone to Ravelry and looked over other knitter's project notes, especially the ones that said "a k2tog on the wrong side is a ssk on the right side." I'm pretty sure that would have gotten my attention.

Learn from my mistakes, people.

Yours truly,
She Who Acts Like She Knows How To Read A Knitting Pattern But Clearly Does Not
at 4:09 PM