It's almost my birthday, so you know what that means...

Yarn. Yarn so soft it's like petting angels. I'm not kidding. And there's also a giveaway. But first, I'm going to be a tease and make you read about my weekend.

I celebrated May Day and my upcoming birthday by going to the Great Western Alpaca Show. It's not just about alpacas. There was all the usual fiber festival stuff--classes, vendors, and very expensive food and parking. I sat in on Donna Druchunas' Japanese crochet class, which was really fun, then afterwards she bought me lunch. Thanks Donna! Pretty awesome in itself, right? But wait--it gets better. And more expensive, much more expensive...

I got to pet this guy. I can't remember his name, but the kid who raised him was awfully proud. Alpacas are so soft and fluffy, you just want to squeeze them like a pillow, but since they will kick the snot out of you, I restrained myself.

This white alpaca was being shown in the ring. It looked like the alpacas were doing some sort of agility course--you can see some of the stuff in the background. I have no clue why alpacas would need to do this, but it was fun to watch. 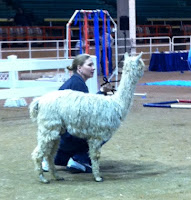 Maybe alpacas like to do crazy stuff and need to get tired out, otherwise they get out of control. Embiggen this photo and check out the signs:

One of the vendors had this very cool knitting machine that she let people take a turn at. You crank the handle and it makes a tube which you can use for socks and scarves:

Now for the pricey part--if you knit, you know what I mean. In my defense, it was on sale for the alpaca show, and tomorrow is my birthday. I couldn't help it and I don't care: 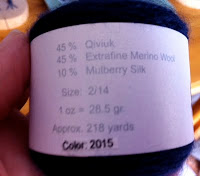 O.K. Enough with the teasing. To celebrate my birthday I'm going to have a giveaway--a very pretty project bag containing yarn and other goodies. No, it won't be qiviuk, but it will be something nice, I promise.

You don't have to do anything to be entered. If you follow my blog you'll automatically be in the drawing. It's just my way of saying thanks for reading. But if you aren't a follower, or for an extra chance at winning, leave a comment about why anyone would take an alpaca up a flight of stairs. Let's make the entry deadline midnight MST, May 4. I'll draw the winner on Cinco de Mayo, which is celebrated mostly here in the U.S., and mostly by drinking beer and eating stuff that gives you gas. Party on!
at 1:10 PM