I'm writing this last post about Sock Summit on the train from Portland to Tacoma, Washington. I'm going up there to spend a few days with family before I head back to Denver. I wish I could take the train back! Right this moment, I've got wifi and a glass of wine. Just polished off a bowl of Ivar's clam chowder and it's so lovely, just sitting back and watching the scenery go by. Nobody xrayed me or grabbed body parts--this is so much nicer than air travel! When I finish this post I'm going to knit a little, if I don't have another glass of wine...

I had another class on Sunday with Anne Hanson, and the poor thing was pretty much fried by then--she came to Sock Summit directly from London and has one more teaching gig before she heads home--but she was gracious and attentive, as always.

The Fleece to Foot Challenge was Sunday--pretty cool, but no one finished their second sock. Not surprising, since they had to comb the fleece, spin it, then knit the pattern, all in a few hours. Crazy! Here are the three sheep that gave it up for a good cause: 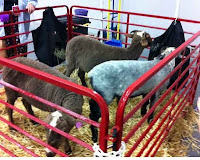 Here's one of the teams:

I heard a rumor that the next Sock Summit (2013) will take up the entire Oregon Convention Center. I'm not sure how they're going to top a flash mob, live sheep and the biggest yarn market I've ever seen but I plan to be here.

I'll try to post about the classes I took before fly back to Denver, but I'm making no promises. I'll be surrounded by nieces and nephews I haven't seen for a while and I'm hoping some of them will sit still long enough for a few knitting lessons. But oh how I wish you could all have been at Sock Summit with me!