Somebody Do a Rain Dance for Colorado, Please

Colorado is making national news again, and not just for our knitted uteri and misogynistic senator who thinks contraception is "recreational." A prescribed burn got out of hand and now there's an out-of-control wild fire not far from where I used to live, in the foothills west of Denver. When you live in these heavily wooded areas you have to be ready to grab what you can and get the hell out FAST. One of the local news stations is talking about what you should grab in case you live up there and have to evacuate at a moment's notice. So far nobody has mentioned yarn stashes. I guess everybody has different priorities, not to make light of this.

One thing most people don't think about are the animals--not just horses, and pets like cats and dogs, but also alpacas and llamas. Being a knitter, I'm wishing I had a back yard so I could help out with these stashes on a hoof. Many had to be rescued and taken to the Jefferson County Fair Grounds, not far from where I live now. I'm hoping to go by there tomorrow and see if I can help in some way.

Speaking of national news, Donna just gave an interview with somebody from ABC news. If I get details about where and when it will air, I'll let you know, but if you follow her on Twitter (@druchunas) you'll probably find out faster.

We've had an amazing amount of coverage for the Snatchel Campaign. Last week I was interviewed by the congressional reporter for the Durango Herald. Yeah, I know. I'm thinking I should buy a new pair of sunglasses so I won't have to deal with autography seekers. But she was a very nice reporter who managed to get the facts mostly straight, something that doesn't usually happen in my experience, dealing with the media and this issue. This could just be sour grapes on my part. A Washington D.C. paper that interviewed me referred to me as a housewife. You can image how surprised DH was, since I haven't done any housework since 1997. Whatever. No offense meant to people who refer to themselves as housewives. I just don't think I should take credit where it's not due.

It hasn't been all uteri all the time. I'm working on a shawl that I need to finish before the end of May. Slam dunk for JelliDonut, right? Not so fast. We're talking lots and lots of nupps (rhymes with soups). It's the Swallowtail Lace Shawl (Ravelry link). Nupps can be a PITA, especially with lace-weight yarns. I did the first pattern repeat of the nupp section and decided that the remaining 10 rows of nupps were going to end up being a living hell if I didn't figure out another way. So, I went to youtube and tried this.

Here's some photos of the crochet hook method for making nupps. The yarn, by the way is Toots LeBlanc, and I cannot tell you how delicious this yarn is. So order some and thank me later. I bought it at Madronna last year and I'm not sorry either. There's actually a Swallowtail Lace shawl knitted with Toots LeBlanc on their website and it is gorgeous. I chose well. 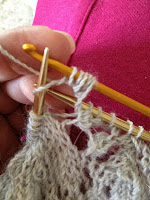 This is one five-stitch nupp worked on the crochet hook. I'm getting ready to pull the working yarn through the five stitches, something that is much easier to do with a crochet hook, in my opinion. Don't forget to drop off that part of the stitch on the left needle. 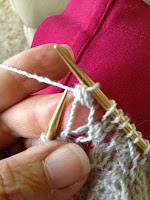 In this photo, I've moved the nupp onto the right-hand needle. Be aware of how you transfer this stitch, and if it's backwards, you'll need to change the way it's oriented on the wrongside row. When you come to this stitch on the purl side, slip it without working it. Otherwise, you'll end up with an extra stitch row-wise. That's because for a traditional nupp you would work these five stitches together on the following row. In other words, you'd purl the five stitches together. Yes, it's as big a pain in the butt as it sounds, which is why I've decided to use the crochet hook method for the rest of the shawl. The resulting nupp does look slightly different, but not in a bad way. The slipped stitch blends in with the YO's that flank it on both sides. I like the way it turned out but you might want to try a swatch and see which method you prefer.