Knitting In the rain, just knitting in the rain... 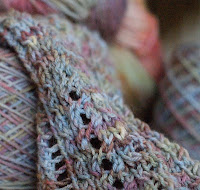 A few years ago I took a Photoshop class. You wouldn't know it if you looked at some of the earlier photos on this blog, but I (mostly) blame it on the crappy little point-and-shoot-yourself camera I was using. Now that I have a DSLR things are looking up camera-wise, so today I tried playing around with Photoshop again. My version is pretty old--CS2. I think they're up to CS783 or something. Doesn't matter though. I have forgotten EVERYTHING I ever knew about Photoshop. Craptastic! Now I need a refresher Photoshop class. My compulsiveness has no limits.
I've gotten a handle on my new shawl pattern, and finalized most of the details. I blocked the swatch and was quite pleased with the result. Isn't it amazing what blocking will do to a lace pattern? What I initially thought was meh at best turned out to be pretty awesome. I wasn't thrilled with the yarn when I bought it but it met the criteria so I took a leap of faith and cast on. The more I knit, the more I like this yarn--Araucanía Ranco Multy. I'm going to alternate the skeins about every eight inches, since each skein is slightly different. I won't bother with alternating two skeins every two rows. I'm thinking that would add too much bulk to the edge of the shawl and the pattern will camouflage the variations. That's all I'm saying about it right now.
I should be able to get in a lot of knitting this week. The pollen count is so high right now I can't go outside without coughing up a lung, so I'm pretty much house-bound. We'll get some relief tomorrow when (supposedly) it's going to rain so hard we'll need boats instead of cars, so that means another day of staying inside. I hope the weather prognosticators are right this time. I haven't seen a hard rain in forever and they repaired the leak from the puny rain we had a few weeks ago. What could go wrong? Besides, they found Noah's Ark, so I'm good to go.
at 11:18 AM